Home » Blog » How to avoid an electrical overload 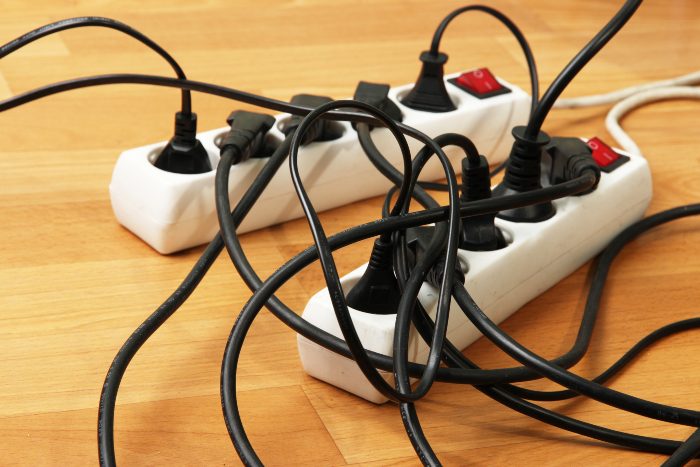 How to avoid an electrical overload

Often, you may not know that you have an overload electric circuit until the breaker trips off. Connecting too many devices into a single circuit may cause an overload. Every circuit has a maximum power it can carry, and there is a higher chance of exceeding this wattage capacity if you plug in too many devices at a time on the same circuit.

One sure way to prevent an electrical overload is to identify a possible overload before it occurs. A circuit with a 15-amps rating has a maximum power of 1,800 watts, while a 20-amp electric circuit may not support a load above 2,400 watts. When you connect several devices to a single circuit, try to identify any equipment with more than half the total power capacity of the circuit and make necessary adjustments.

There are specific appliances that consume more power. It is best to identify these devices and ensure they are switched off when not in use. Although most people do like to switch or unplug high energy-draining items like their refrigerators, you can switch off your televisions, toasters, kettles, and computers from the wall when you are not making use of them.

Aside from helping you save power, switching off these idle devices helps to increase their longevity.

Some older homes do not have circuits that can withstand high power from appliances compared to modern homes. If you notice that your home’s electrical circuits cannot withstand the current electrical demands, it is best to consider rewiring your home. You can hire a professional and licensed electrician to rewire your house and replace old electrical circuits with ones that have a higher load limit.

Why you should know the power rating of your home appliances

Most people are unaware of how much power their different home appliances utilize. Knowing the minimum load of each piece of equipment can help you avoid overloading your electrical circuits. It is also critical to have dedicated circuits for specific appliances due to their heavy loads. Appliances like laundry equipment, microwave, or furnace should have individual circuits to avoid overloading one circuit.

Here are some common appliances and their power range

What are the signs that you may have an electrical overload circuit?

When you touch the plastic coating of your electrical circuit, and it feels hot, or you notice signs of melting on the surface, it may be a sign that the circuit is overloaded.

Sometimes your appliance may have the power light on, but it is not powering. A faulty or overloaded circuit may cause such occurrence.

One way to diagnose an overloaded circuit is to perceive a burning smell coming from the circuit.

An electrical overload circuit may damage your equipment circuit and cause more severe issues if not identified. If your home wiring has circuits with a low power limit, you can call RG Electric for home rewiring and fixing any electrical issues in your home.